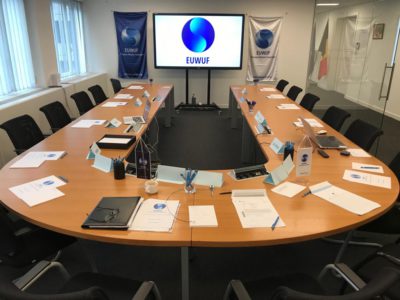 4 January 2020 was a historic day for European wushu sport.

From two countries, observers were present: from Spain, Juan Peres, and from Portugal  Pedro Ferreira.

The General Assembly was constituted and the statutes of the EUWUF were accepted by the delegates.

Upon the candidacy proposals – Patrick Van Campenhout was proposed and elected for the President of the EUWUF. The president then proposed a list for executive members which was accepted by the GA.

The Executive committee is composed of the following persons:

One position for Vice-president is left free until the next GA meeting.
Marc Heyvaert (Belgium) was appointed Head of the EUWUF administration.
The European championships (EC) for 2020 will be held in Burgas, Bulgaria May 28-31, 2020.

The executive committee held its first meeting on January 5th in Brussels.
On that meeting the following functions were appointed:

Members of the Traditional Wushu Committee:

Members of the Marketing & Development committee:

♦ Chairman of the Youth and Education committee is Christophe Bauweleers (Belgium).

All member federations will be invited to propose additional candidates for the above mentioned committees as well as other committees (Audit, Medical, Legal, Sanshou, Modern Taoulu, Disciplinary, Judge, etc..)

Regarding the EC in Burgas, by the end of January, regulations and invitations will be sent to all members and other European federations.

Gallery with photos from the Congress of EUWUF→